Househunter shocked as he’s shown a house with kitchen, toilet, and bathroom sharing the same space in Lekki (video) 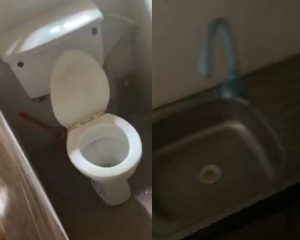 A man looking for a house has taken to social media to express his surprise after he was shown an apartment with the kitchen and toile within the same tiny space.

The house hunter has shared a video of the house he was shown in Lekki, Lagos state, Nigeria, with the kitchen, toilet, and bathroom sharing the same space.

The house hunter took to Twitter to express his disappointment as he shared photos and videos of some of the houses he’s been shown.

The video shows a room with a toilet, shower, wash basin, and a kitchen all in the same place.

The house hunter made it clear that he won’t be accepting the house.

Saxon is a prolific writer with passion for the unusual. I believe the bizarre world is always exciting so keeping you up to date with such stories is my pleasure
Previous Terrifying Video Shows Man Allegedly Shove 52-Year-Old Woman Onto Subway Tracks in New York
Next Outrage as businessman Jaco Swart, who was filmed beating his wife to a pulp, avoids jail after judge fined him only R20K (Terrifying video)