Man commits suicide after his wife ‘denied him conjugal rights’ 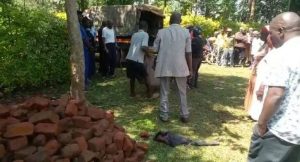 A 50-year-old man has reportedly taken his life after a domestic wrangle in Ebungaya village in Kenya, on Monday, September 5.

Lifeless body of Ezra Skim was found hanging from a tree with a rope on his neck in the wee hours of Tuesday, after it was reported that he disappeared on Monday.

The deceased’s sister Jetina Tegeno told newsmen that her brother had been complaining of domestic abuse before his death. She claimed that Skim’s wife maltreated her brother and often denied him his marital rights.

“In his last days, he (Skim) appeared stressed. He has been accusing his wife of mistreating him”, Tegeno said.

Recounting the events of the night, Skim’s wife Maximila Anyika said they were sleeping when the deceased stormed out of the house. He never returned.

“He suddenly came out of bed as we were sleeping, with no explanation he headed outside and bang the door behind him. We were shocked to find his body dangling from a tree,” Anyika narrated.

The deceased body was taken to Mukumu Mortuary awaiting autopsy.

Saxon is a prolific writer with passion for the unusual. I believe the bizarre world is always exciting so keeping you up to date with such stories is my pleasure
Previous Monkey seizes woman’s phone and destroys it in Burundi zoo (video)
Next Police apprehend man for allegedly raping 16-year-old girl on a grave in Gombe