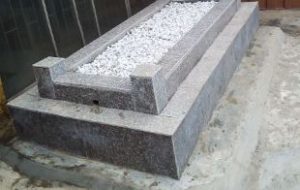 Police in Gombe State, Nigeria have arrested one Reuben Azariah of Tarmana ward, Kaltungo Local Government area for allegedly raping a 16-year-old girl on a grave.

Confirming his arrest to newsmen, the spokesperson of the command, Mahid Abubakar, said on September 2, at about 8:30 pm, a complaint was received from the girl’s mother that on the same date at about 8pm, the suspect took her daughter to a grave site in her compound and forcefully had carnal knowledge of her on top of the grave.

On receipt of the complaint, police operatives from Kaltungo Division swung into action and arrested the said Reuben Azariah.

Mahid said the victim and suspect were taken to General Hospital, Kaltungo, for medical examination, adding that the case was under investigation after which it would be taken to court for justice.

Saxon is a prolific writer with passion for the unusual. I believe the bizarre world is always exciting so keeping you up to date with such stories is my pleasure
Previous Man commits suicide after his wife ‘denied him conjugal rights’
Next Naked man jumps from roof to roof after firing shots as police try to nab him (video)