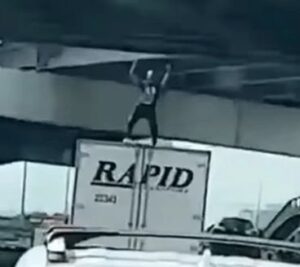 A 25-year-old man who was dancing on top of a trailer slammed into an overpass and died.

The unidentified man was knocked off an 18-wheeler on Eastex Freeway in Houston, Texas, around 11.30am on November 10.

Footage recorded by a driver shows the man standing on a white truck and dodging one overpass. He then gets up and moves his hips and arms and appears to be looking to the right when a second overpass hits him, shows the video obtained by the Daily Mail. 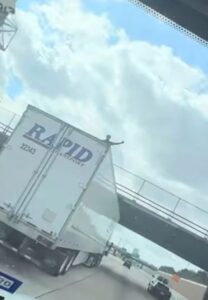 It happened as the truck moved under the Tuan Street Bridge, according to the Houston Police Department.

The man was transported to Memorial Hermann Hospital, where he was pronounced dead, the Fort Worth Star-Telegram reported. 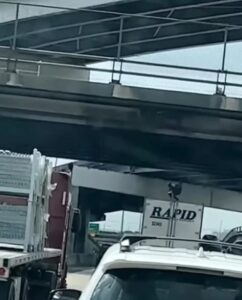 The truck driver was questioned and released after he was found not to be impaired.

Police have launched an investigation into the incident.

A driver who was four vehicles behind the truck, Crystal Davis, told DailyMail: “I saw the blood chunks on the ground. I saw the contorted body and broken neck and arm.

“It was horrible way to begin a day.”

Saxon is a prolific writer with passion for the unusual. I believe the bizarre world is always exciting so keeping you up to date with such stories is my pleasure
Previous Nigerian man accused of leaking his sex tape with South African legislature speaker after she refused to give him R300,000
Next Husband detains and starves wife for one year