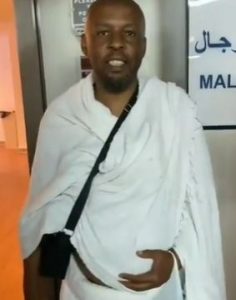 He was overwhelmed with joy for eventually arriving at his destination after a long while.

A man who began walking from South Africa to Mecca has arrived the country just in time for hajj.

In a video making the rounds on social media, the man said he left South Africa on the 20th of August 2018 and then walked to Zimbabwe, Zambia, Tanzania, Kenya Sudan, Egypt, Gaza, Palestine where he stayed for a year and eight months due to the Coronavirus outbreak.

He said after the borders were reopened he continued his journey through Jordan, Medina and now he is in Mecca.

Watch a video of him speaking below;

Saxon is a prolific writer with passion for the unusual. I believe the bizarre world is always exciting so keeping you up to date with such stories is my pleasure
Previous Boy, 16, goes viral after wearing a sequined tuxedo jacket and red skirt to his prom
Next Police arrest bull for killing woman in Kenya