Boy, 16, goes viral after wearing a sequined tuxedo jacket and red skirt to his prom 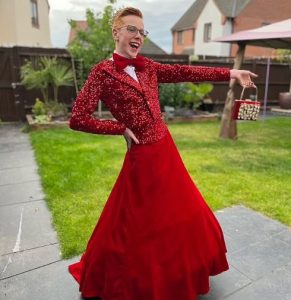 A schoolboy has gone viral after he wore a bright red skirt and sequined tuxedo jacket to his prom.

Sixteen-year-old Korben’s bold fashion choice went viral on Twitter after his mother, Nina Green, tweeted photos of his outfit and wrote how proud of him she is. 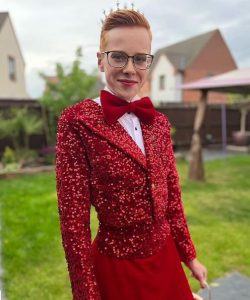 Korben reportedly got loud cheers from his classmates and staff members at Archbishop Sancroft High School in Harleston, Norfolk, when he stepped out in the skirt.

His mother Nina captioned the photos on Twitter: “At age 12, my son announced he wanted to go to his school prom in a gown. Four years later we made it happen. 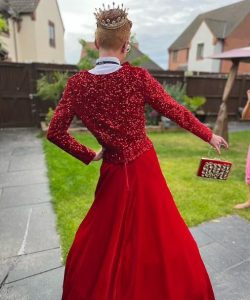 “I’m so incredibly proud of him for being true to himself and the reception he got from his whole school was incredible.”

Surprisingly Visage replied: “Ohhhhhhhh yes! You are an amazing, beautiful mom and your child is a STAR.”

Saxon is a prolific writer with passion for the unusual. I believe the bizarre world is always exciting so keeping you up to date with such stories is my pleasure
Previous Cheating wife forced to carry her husband through streets after being caught having an affair (Photos)
Next Man who began walking from South Africa to Mecca arrives after three years of walking (video)