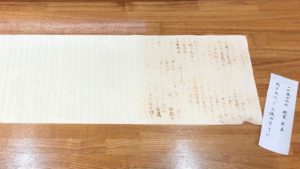 A Japanese student of ninja history was recently commended by her teacher for handing in a blank sheet of paper on an assignment that required her to write an essay on ninjas.

Ninjas were famous for their covert operations, so when Eimi Haga’s ninja history teacher at Mie University asked her to write an essay about a visit to the Ninja Museum of Igaryu, she decided to do it in a way that would reflect her passion for everything ninja. Plus, the teacher said he would reward students for creativity, so she had extra motivation to come up with something that would make her assignment stand out. Her essay was so ingenious that it left even her teacher scratching his head for a while.

“When the professor said in class that he would give a high mark for creativity, I decided that I would make my essay stand out from others,” Eimi recently told Japanese reporters. “I gave a thought for a while, and hit upon the idea of aburidashi.” 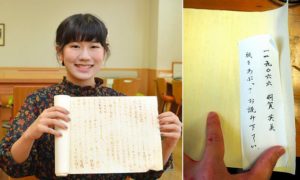 Aburidashi is a traditional Japanese technique used for exchanging secret correspondence in the past. The young student, who had become fascinated with ninjas ever since watching an anime series as a child, spent days researching the technique and then hours soaking and crushing soybeans to make the invisible ink.

The 19-year-old soaked soybeans overnight, crushed them and squeezed an extract out of them through a cloth. She then mixed the extract with water, spending several hours to get the concentration just right, and then used a fine brush to paint her essay on a Japanese “washi” paper. When she handed in the blank sheet of paper, even her ninja history teacher was surprised.

“I had seen such reports written in code, but never seen one done in aburidashi,” Prof. Yuji Yamada said. “To be honest, I had a little doubt that the words would come out clearly. But when I actually heated the paper over the gas stove in my house, the words appeared very clearly and I thought ‘Well done!’”

Yamada didn’t even read the whole essay, opting instead to leave part of the paper unheated to show the media the before-and-after effect, but gave Eimi top marks for her creativity, just as he had promised. That was just what the 19-year-old had been hoping he would do, as she herself admitted that the essay was nothing special.

Saxon is a prolific writer with passion for the unusual. I believe the bizarre world is always exciting so keeping you up to date with such stories is my pleasure
Previous News Reporter’s Son Interrupts Her Live Broadcast In Hilarious Video
Next Mexican Mayor Uses Lifesize Cutout of Himself at Events He Can’t Physically Attend