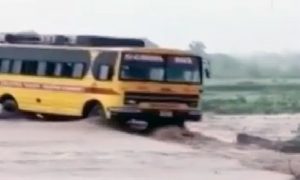 A school bus was washed away in Uttarakhand, a state in Northern India, as it tried to move across a flooded road.

Horrifying visuals of the incident, which took place in Tanakpur in Champawat district, showed the bus being toppled over by floodwaters.

An official said no student was in the bus at the time of the incident and its driver and conductor were safely evacuated.

“A school bus was washed away this morning. The driver was apparently at fault as the waterflow was not that strong that it will wash away a bus,” Himanshu Kafaltia, Sub-Divisional Magistrate (SDM), Tanakpur said.

Meanwhile, landslides led to blockages along the Rishikesh-Kedarnath highway and several other highways and 89 rural roads in the state, reported news agency PTI.

Most of the districts in Uttarakhand received rains today and the weather department has predicted a similar weather for tomorrow. Heavy to very heavy rainfall has been predicted at isolated places in Dehradun, Tehri, Pauri, Nainital, Champawat, Udham Singh Nagar and Haridwar districts.

In neighbouring Himachal Pradesh, a cloudburst was reported today that led to the erosion of several small water canals, according to news agency ANI.

The cloudburst occurred in Shalkhar village. Some vehicles were buried and some houses were damaged, the District Emergency Operations Centre said.

Saxon is a prolific writer with passion for the unusual. I believe the bizarre world is always exciting so keeping you up to date with such stories is my pleasure
Previous Watch! Chimpanzee Shares Apple With Tortoise, Internet Overwhelmed
Next 53-Year-Old Man In US Sets Record For Pushing Peanut Up Mountain Using His Nose