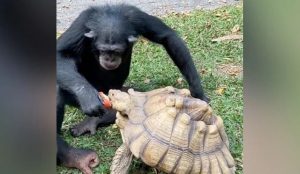 A video has surfaced online showing the unusual friendship where an ape is sharing an apple with a tortoise.

The video, posted on Twitter by Buitengebieden, is winning hearts on social media. It has been captioned: “Sharing is caring.”

The video begins with a chimpanzee eating an apple. After having a bite, he offers the next one to the turtle sitting beside him. Another chimp sitting next to the two friends is seen adoring the tortoise later in the video.

After being shared, the video has accumulated around 8.8 million views and more than 3.4 lakh likes on Twitter. Over 49,000 users have re-tweeted the post so far.

Users have left heartfelt remarks for the chimp’s kind behaviour. “I love civility, among beings,” wrote a user while another said, “Mom always says it tastes better when u share.”

Saxon is a prolific writer with passion for the unusual. I believe the bizarre world is always exciting so keeping you up to date with such stories is my pleasure
Previous Terrifying moment Chelsea loanee Tiemoue Bakayoko is held at gunpoint by Italian police in a case of mistaken identity (video)
Next Terrifying Video Shows School Bus Topple Over In Floodwater In India