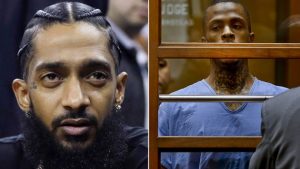 The shooter, Eric Holder has been charged with Hussle’s death. He was indicted on one count of murder, two counts of attempted murder, and one count of possession of a firearm by a felon, according to the Los Angeles County District Attorney’s Office.

‘It was a devastating attack ….a very personal attack,’ Deputy District Attorney John McKinney told the jury of nine women and three men in his opening statement at the trial of aspiring rapper Eric Holder, 32, the man accused of using two guns to shoot Hussle at least 10 times in March 2019.

Holder, who grew up in tough south LA where both he and Hussle were recruited by the Rollin’ 60s gang, also known as the Neighborhood Crips, is charged with one count of murder, two of attempted murder, two of assault with a firearm and one of possession of a firearm by a felon.  He faces up to life in prison if convicted as charged. He has pleaded not guilty.

The prosecution began by describing Hussle as a father, a son, comparing him in sharp contrast to Holder.

“The defendant, in this case, was also an aspiring rapper – not nearly as successful, not nearly as respected and the two didn’t really have a lot in common,”  McKinney told the jury. “They were two men whose arcs in life were bending in two different directions. The one thing they did have in common was their roots.”

Calling the star’s killing a ‘premeditated and deliberate’ murder, McKinney said Hussle was ‘shot from the bottom of his feet to the top of his head,’ after accusing fellow gang-member Holder of being a ‘snitch.’

Just before firing, he added, Holder told Hussle. ‘You’re through,’ and when the first shot hit him, the Grammy-winning hip hopper yelled, ‘You got me.’

Witnesses, including the woman who drove Holder from the scene, are expected to describe a conversation between Holder and Hussle that apparently had to do with rumors about “snitching,” before Holder allegedly fatally shot Hussle 10 times.

Following that conversation, McKinney said Holder asked the woman who was driving the car to circle behind the parking lot, before they return to the scene where he fatally shot Hussle 10 times.

Videos presented in the courtroom will show the moments that Holder allegedly fired at Hussle.

“There’s a range of consequences for people who snitch,” McKinney said. “No gang member wants to be considered a snitch.”

However, he told the jury that it was Holder’s passionate response to the “snitching” accusations against Hussle and was not premeditated.

“This is a case about the heat of passion,” said Jansen. “The provocative act in this case was that Nipsey Hussle made an accusation against Mr. Holder that he was a snitch.”

Jansen said that the first-degree charge for premeditated murder should instead be “voluntary manslaughter.”

Hussle, the grammy-winning rapper whose real name was Ermias Asghedom, was gunned down in April 2019 outside of his clothing store in South Los Angeles.

Hussle was standing in a parking lot when Holder allegedly approached and shot him multiple times and left two other people wounded, police said. Hussle was taken to a local hospital where he was pronounced dead.

The coroner determined the rapper died from gunshot wounds to the head and torso, ruling the manner of death a homicide.

Los Angeles Police Chief Michel Moore said the slaying stemmed more from a personal dispute between the two men, though Holder is believed to have been involved in gang activity.

The rapper was an anti-violence advocate who had a meeting planned with the city’s police chief and the president of the police commission to discuss ways he could help prevent children from getting involved in gangs.

He was a father of two, leaving behind daughter Emani, 13 and son Kross, 5 – from his relationships with Tanisha Foster and Lauren London, respectively.

His estate was appraised at $4.1million after his death.

Vanko is a cheerful writer whose enthusiasm for unusual stories is inspiring.
Previous Watch: Tonne of cocaine concealed inside potatoes spotted and seized by police (video)
Next Girl, 4, dies after being accidentally locked for more than seven hours in 50C school bus