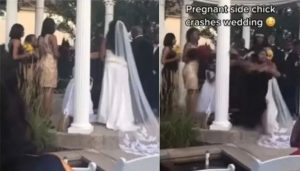 A video has surfaced online showing the moment a pregnant side chick crashed her boyfriend’s wedding.

The affected man, Anthony thought he was opening a new chapter of his life, however, his mistress went public with their affair.

The unidentifed lady asked the groom why he was ignoring her and acting like he doesn’t know her despite carrying his baby.

As she kept ranting, the bride’s daughter who was one of her bridesmaids could no longer contain in and took matters into her own hands.

She told the side chick to leave her mother’s wedding and almost became aggresive to the ranting lady.

It took the timely intervention of wedding guests and even the bride to restore calm and prevent the side chick from being beaten to a pulp.

Saxon is a prolific writer with passion for the unusual. I believe the bizarre world is always exciting so keeping you up to date with such stories is my pleasure
Previous Boy saves drowning mother suffering seizure in pool (video)
Next Måneskin VMAs performance censored after wardrobe malfunction reveals nipple