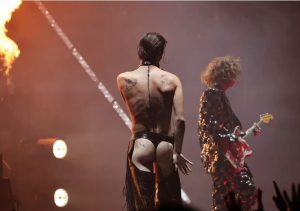 The MTV Video Music Awards (VMAs) 2022 took place last night and one of the highlights of the event was singer Måneskin’s “Supermodel” performance where there was a wardrobe malfunction.

The wardrobe malfunction pushed the network into cutting away to a visual of empty seats for about 40 seconds after their bassist’s top fell off, causing her breast to be fully exposed, reports NYPost.

Photos shared online showed that Victoria De Angelis moved to the front of the stage as a crowd of dancers surrounded the band. 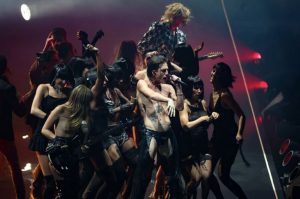 However, as everyone jumped and danced, her top pooled around her waist, completely exposing her.

Since the show must go on, the 22-year-old simply kept playing the bass, which caused the cameras to turn away from the band. 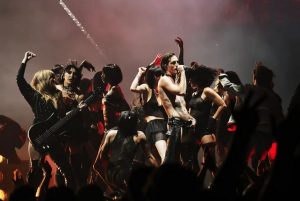 Fans, who had no knowledge of the wardrobe malfunction, immediately turned to Twitter to express confusion and disappointment with MTV’s creative decision.

While the in-person audience could see the Italian rock band’s performance, viewers at home were treated only to David’s spicy pants choice as he gyrated his hips throughout the performance.

Saxon is a prolific writer with passion for the unusual. I believe the bizarre world is always exciting so keeping you up to date with such stories is my pleasure
Previous Pregnant side chick crashes boyfriend’s wedding (video)
Next Swedish girlfriend of Nigerian singer releases his nude over alleged claim he impregnated and dumped her (video)