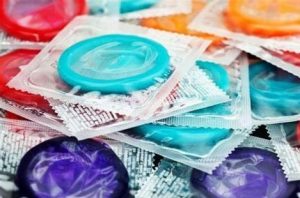 They are making adjustments to accommodate the rising cost o existence in their country but some of the options are indeed unbelievable.

Reposts have it that some sex workers in Zimbabwe have resorted to using bread packets as contraception as the price of condoms and basic essentials continues to rise.

A 21-year old sex worker from Mutare who spoke to Manica Post, revealed that she started sex work at 16, and bread packaging was being used as a substitute for condoms when sex workers face shortages.

Mutare medical practitioner Dr Tendai Zuze also bemoaned how thigh vendors have resorted to using bread packets as protection. Zuze who stated that bread packets are risky as it might not be strong enough to sustain the pressure of friction during intercourse, and can easily break and put the people involved at risk of transmission of sexually transmitted diseases.

iHarare also reported that sex workers at Dema growth point are now accepting buckets of maize and cups of beans as payment from their cash-strapped male clients.

Speaking to a local publication at Dema growth point in Seke rural, sex workers appealed to the government and other organisations for low-interest loans to start income-generating projects to fend for their starving families.

One of the sex workers, who only identified herself as Alice said;

“Gone are the days when we used to charge US$5 for the whole night. These days even one dollar is accepted, so that you are able to buy vegetables and tomatoes and cook something for your starving children.”

She said she has three children, one of which is doing Form 4. The child needs ZIMSEC (Zimbabwe Schools Examination Council) registration fees while the other kids are in Grade 7 and Grade One.

“I now even accept a bucket of maize or cups of dried beans as payment for sex services. At least I am assured that my kids will have porridge.”

Saxon is a prolific writer with passion for the unusual. I believe the bizarre world is always exciting so keeping you up to date with such stories is my pleasure
Previous Two pre-school teachers arrested after they were caught on camera abusing kids (video)
Next Gymnast Simone Biles among 90 athletes seeking $1 billion from FBI for failing to stop disgraced doctor Larry Nassar’s sexual abuse