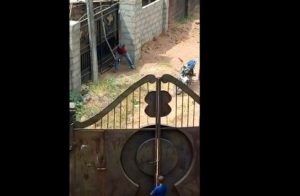 Killing a dog for delicious dog meat pepper comes with mixed feelings depending on the side you’re on. The dog meat seller will be happy while the person who loved the dog while alive will be sad.
Dog meat pepper soup is a delicacy common in some African countries. The first stage involves killing the dog and this is the stage most people cannot withstand because of their love for dogs.

Well, this man could not stand killing his dog so he sold it to those who buy dogs for pepper soup and they took it outside his compound to kill.

His son who used to love the dog stood by the gate and cried as the dog was being killed outside their compound.

We heard that the dog was very sick and was about dying before it was sold off for the meat pepper soup.

If you can get past this first stage then you can conclude the cooking.

The exact location of this incident is not known but it happened somewhere in Nigeria some years ago.

Saxon is a prolific writer with passion for the unusual. I believe the bizarre world is always exciting so keeping you up to date with such stories is my pleasure
Previous Shocking Video: Driver Hits Deer on Highway at 70mph (graphic content)
Next Bearded Dragon Arrives With Head Stuck In Toy (Viral video)