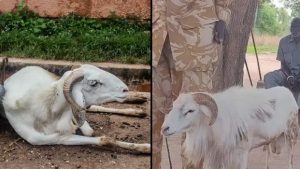 One thing that is clear here is that the cow did not provide any verbal defense before the court but it’s cooling off in jail now.

A sheep has been sentenced to jail for three years after he was found guilty of killing a woman.

The ram was taken into police custody in South Sudan earlier this month after it attacked Adhieu Chaping, a 45-year-old woman who later died due to injuries sustained from the attack..

“The ram attacked by hitting her ribs and the old woman died immediately. So this is what happened in Rumbek East in a place called Akuel Yol,” Major Elijah Mabor said.

“Our role as police is to provide safety and separate fights. The ram was apprehended and currently under custody at a Police Station of Maleng Agok Payam.”

Major Mabor explained why the ram was arrested for its actions: “The owner is innocent and the ram is the one who perpetrated the crime so it deserves to be arrested then later on the case shall be forwarded to customary court where the case can be handed amicably.”

The ram will now spend the next three years in a military camp in Aduel County headquarters in Sudan’s Lakes State.

It is unknown if the animal has expressed remorse for his crime.

A local court also ruled that the owner of the ram, Duony Manyang Dhal, will have to hand over five cows to the victim’s family as compensation.

Reports say that County administrator Paul Adhong Majak said the ram’s owner and the victim’s family are related and ‘neighbours’.

After serving its jail term, the ram will be gifted to the family of the deceased in accordance with local law.

Both families have since signed a contract to formalise the agreement with police and community leaders acted as witnesses.

Probably thti sis a warning to other cows to behave well while in public.