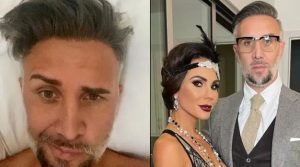 He just revealed in a video that he is a ‘grower not a shower’.

Keiran Lee, from Derby, UK, has made a name for himself in the adult entertainment industry – in large part due to his large manhood.

Indeed, the tool of his trade is so important that it got insured for a small fortune.

Appearing in a bizarre segment on GB News, Keiran said: “With inflation now, God knows what it’s worth.”

However, while his appendage may look impressive on camera, he admitted it takes time to get it ready for presentation.

“But then once a bit of blood flow goes, he does the trick, he looks alright on camera.”

Keiran – who now lives in Los Angeles – was appearing on the show to discuss the age old question of whether size does indeed matter.

In his line of work at least, it seems it does.

“Working in our industry you kind of have to have a big penis,” he said.

“It’s not like sex at home. With sex at home, you’re just on top of your partner, where here you’re basically having to do yoga to let a camera see all the angles and everything that you need to see.”

“I’ve got friends over here that aren’t the biggest shall we say, but that’s all they’re worried about,” he said.

Saxon is a prolific writer with passion for the unusual. I believe the bizarre world is always exciting so keeping you up to date with such stories is my pleasure
Previous Shocking Video: Passengers Cry Out In Terror As Officers Drag Steering Wheel With Bus Driver on High Way
Next Sheep Sentenced To Three Years In Jail After Being Convicted Of Killing A Woman