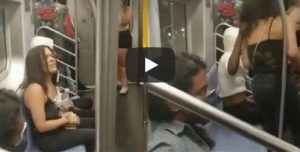 A shocking video has shown moment a woman was assaulted on a New York City subway train while bystanders watched and did nothing.

The video has gone viral on social media and the incident took place a few days ago.

The video shows a young man acting out on the subway. As other passengers move away from the young man, he pulls one female passenger down onto a seat by her hair.

Sky News Australia Reporter, Rita Panahi, reported the news about a woman assaulted on a train in New York by a man who appeared to be insane or under the influence of drugs.

Rita accused the passengers of being cowards and doing absolutely nothing to stop the assault when the woman asked for help. She also asked, “Where have all the men gone?”

The female reporter seemed furious that men on the train could not respond to the woman’s call for help.

But some responses on social media were even more disturbing as male commenters said the city seemed to protect criminals more than law-abiding citizens.

See some comments on social media made by male commenters below; 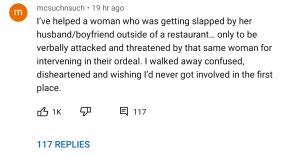 Saxon is a prolific writer with passion for the unusual. I believe the bizarre world is always exciting so keeping you up to date with such stories is my pleasure
Previous Lady transports man on her big backside (video)
Next Pastor accused of making an ”infertile couple have intercourse” on the altar in front of congregation, Church denies allegation