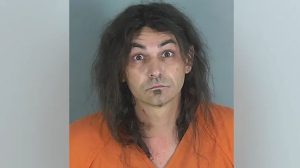 A man who has been accused of twice tossing a dog over a bridge claims he was instructed to do by witches, according to police.

Spartanburg County Environmental Enforcement Officers responded to a call Monday, October 3, 2022, of someone tossing a dog from a bridge over water located on Highway 11 in the Fingerville area of Spartanburg County.

Officers determined the distance from the bridge to the ground was approximately 34 feet. The one-year-old dog did not show any visible signs of injury but was “clearly shaken” by the incident, police said. The dog was transported to Greenville County Animal Care for assessment.

Saxon is a prolific writer with passion for the unusual. I believe the bizarre world is always exciting so keeping you up to date with such stories is my pleasure
Previous London-Lagos flight delayed as ‘Nigerian deportee smears poo all over plane’, came out from toilet butt-naked
Next Alabama man out on bond for domestic violence charge allegedly pours boiling water down baby’s throat