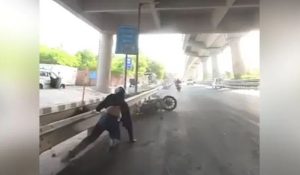 A successful biking trip almost ended up tragically for a young Indian man after he was hit on their way home by an angry SUV driver.

The incident which was captured in a shocking video clip shows a hit and run case in Delhi and this video is going viral on social media. It shows a group of bikers riding on a Delhi road when they get into an argument with a man driving a Scorpio car.

This incident happened on Sunday, March 5 right below the Arjangarh metro station in the national capital. The biker who was hit has been identified as Shreyansh who is 20 years old. He was returning to Delhi after a biking trip with his friends.

Shreyansh told news agency ANI that he was returning to Delhi from Gurugram with a group of his friends when the driver of the car started hurling abuses and threats at them.

“I was returning with eight to ten of my friends from Gurugram to Delhi when he came near us and started rash driving. He threatened and verbally abused my friend. My friends slowed down a little but I drove ahead. The man sped up, hit my bike and sped away,” he said.

Please help us , the Scorpio Car driver almost killed a few of our riders and threatened to kill us by crushing us under the car.

This is not what we vote for or pay taxes for

no one was severely injured
Gears respect riders pic.twitter.com/rcZIZvP7q4

Delhi Police had taken cognisance of the matter and asked the bikers to file a written complaint. Once the complaint was filed at the Fatehpur Beri police station, the police registered a case of attempt to murder against the driver. Delhi Police said it has identified the four-wheeler and an investigation into the matter is underway. The driver will soon be arrested, they said.

“Please help us, the Scorpio Car driver almost killed a few of our riders and threatened to kill us by crushing us under the car.

Saxon is a prolific writer with passion for the unusual. I believe the bizarre world is always exciting so keeping you up to date with such stories is my pleasure
Previous Charming Video Of Penguins Chasing A Butterfly Goes Viral
Next Man Begs As Lady Confronts Him For Sexually Harassing Her In A Bus (Video)