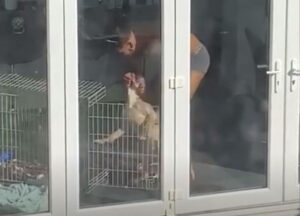 A young man has been charged after brutally assaulted his dog as seen a video of the incident which was secretly recorded by his neighbor.

The distressing video showed the man punching and throwing the puppy at home after “completing a cycle of steriods”.

Callum Ruane, 21, was filmed by his neighbour torturing a four-month-old American bull dog, Dice, at his then-home in Savannah Place, Warrington.

Ruane, who walks into the kitchen wearing a pair of boxers, is shown getting mad at Dice after realising the dog had chewed a bag, some money and a pair of sunglasses. 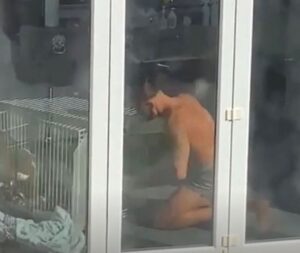 He holds the pet off the floor by his head and neck while another dog is “spinning around agitated”.

Then he throws Dice in a crate and he climbs in, throwing punches and using objects to jab the puppy.

Ruane appears to look to see if anyone is watching before opening the door and delivering a series of quick-fire punches to Dice’s head.

In other footage, Ruane tempts Dice out of his crate as if he wants to show the pup affection, only to punch him and launch him back inside.

Ms Perry sent the clip to animal rights group RSPCA, who later prosecuted Ruane for his abusive behaviour towards the dog.

Carmel Wilde, prosecuting on behalf of the RSPCA, told Liverpool Crown Court on Friday (July 29), that RSPCA inspectors confronted Ruane with the footage.

He confirmed he was the man in the video and admitted his behaviour was unacceptable, blaming steroids for making his head “f***ed”.

The court heard he became tearful and said “if I could change it I would”, reported Liverpool Echo.

Both Dice and another dog, Kilo, were removed from the home but vets later diagnosed Dice with hip dysplasia, caused by an underlying genetic disorder, and a decision was made to euthanised Dice.

Ruane, of Bewsey Road, in Bewsey, Warrington, admitted a charge of cruelty to a protected animal but initially claimed he had only abused Dice on one occasion.

Peter Gilmore, defending, said “This offending was out of character for him. It occurred at a time when he abusing steriods; that’s not an excuse but it’s an explanation as to why he was unable to control anger at that time.

Ruane was handed a 16-week prison term, suspended for 12 months, and ordered to complete 150 hours of unpaid work and to attend 20 Rehabilitation Activity days with the Probation Service.

He was also ordered to pay £1,800 in prosecution costs.

Judge Recorder Richard Leiper, QC, said Ruane would be banned from owning or controlling any animal for five years unless a court lifted the disqualification order, which could not be for a minimum of two years.

Saxon is a prolific writer with passion for the unusual. I believe the bizarre world is always exciting so keeping you up to date with such stories is my pleasure
Previous Mayor marries alligator wearing white wedding dress in historic ritual
Next Topless woman who pleasured herself outside Waitrose supermarket had hoard of sex toys in her handbag