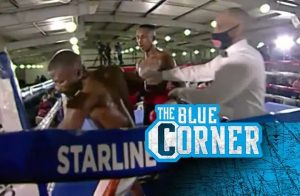 A video is making the rounds on social media showing frightening moment in a recent boxing bout in Africa where a stunned boxer engaged in shadow boxing backing his opponent in the middle of a fight.

The video which surfaced on Sunday afternoon showed the then-unbeaten boxer Simiso Buthelezi becoming puzzled and swinging in mid-air opposite to his opponent Siphesihle Mntungwa during their contest for the WBF African lightweight title. The bout took place at the Greyville Convention Centre in Durban, South Africa.

The disturbing incident occurred in the 10th round of the bout soon after Mntungwa fell through the ropes during an exchange with Buthelezi. Mntungwa quickly got back in the ring and the referee restarted the action. It was then that Buthelezi seemed to lose his senses. He turned away from his opponent, toward the referee, and then began swinging punches as he approached an empty corner of the ring.

The referee immediately stopped the fight and the win was awarded to Mntungwa. According to Tim Boxeo Twitter account, which posted the video, Buthelezi is currently in stable condition and will be overlooked over the next few days.

An update posted on the thread shows that Buthelezi was in stable condition after the fight.

“Sources share that Simiso Buthelezi is currently in stable condition in South Africa and in the next few days more will be learned as to what could have potentially caused a very scary and odd response in the ring,” Tim Boxeo wrote on Twitter.

Saxon is a prolific writer with passion for the unusual. I believe the bizarre world is always exciting so keeping you up to date with such stories is my pleasure
Previous Viral Video: Wild horses chased by grizzly bear run for their lives
Next Video: Fighter fakes walk-away, turns and lands smashing knockout blow