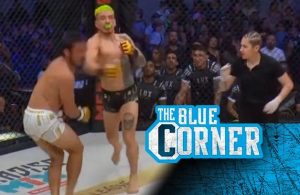 A LUX fight took place in Mexico city has shows how one of the opponents applied a trick that finished off the encounter in remarkable style.

This headliner involved Sergio Cossio and it was the Lux Fight League 22 main event Thursday in Mexico city.

Cossio looked like he was wrapping up some ground-and-pound on Edgar Delgado and was going to let him up just before the bell at the end of the round.

He then got back to his feet and started to walk away. The referee never inserted herself between the two fighters, though, to give Delgado a chance to get reset. She looked like she might be ready to jump in to let Delgado fully restart, but never did – and Cossio took advantage.

MY GOD. Sergio Cossio acted like he was letting Edgar Delgado off the hook. Knocks him out cold at the bell.#LUX022 pic.twitter.com/lCo8ErrqFO

That little hesitation on the ref’s part allowed Cossio to quickly turn around from a walk-away that never really happened. He winged a left hand that just missed while Delgado was pushing back upward, but a right hand connected flush and Delgado hit the canvas just as the horn sounded – with the referee waving her arms for the one-punch KO to end the fight.

This fight might be a subject of controversy but not due to Cassio’s fault. Probably the referee was expected to do more than she did during the walkaway by Cassio but the fight is now over and Cassio won in grand style.

Saxon is a prolific writer with passion for the unusual. I believe the bizarre world is always exciting so keeping you up to date with such stories is my pleasure
Previous Stunned boxer fights non-existent opponent (Shocking Video)
Next Woman allegedly tracks boyfriend with AirTags, kills him after spotting him with another woman