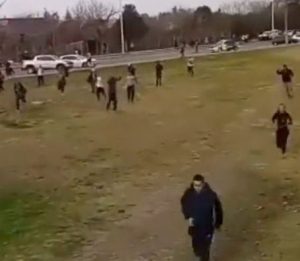 There was pandemonium after violence erupted at a football match in Argentina leaving a teenager fighting for his life.

A Buenos Aires derby between Club Lujan and Club Alem was suspended after 12 minutes when gunshots were heard outside the stadium.

Local reports suggest armed ultras arrived in cars and opened fire at home supporters – who had gathered in pubs around the ground.

An 18-year-old has been left fighting for his life as a result of the shootings while fifteen more were injured after being hit by bullets.

A video of a boy clutching his stomach while covered in blood and receiving medical care from a paramedic has emerged on social media.

As reported by Argentinian outlet Infobae, shots were initially heard outside the stadium in the 12th minute. A gang arrived outside the ground in two cars and shot towards home fans.

Police initially started firing rubber bullets at Lujan fans before being informed of the true events. Officers later used tear gas as several shocking videos of supporters either fighting or running away from the violence have been shared on social media.

A total of 16 people have reportedly suffered injuries in what has been described as “another sad day for Argentine soccer” by the local press.

“Unfortunately the classic was suspended due to incidents,” read a statement on Club Alem’s Facebook page. “What should be a football party is overshadowed by a group of violent people.”

Alem coach Horacio Fabregat said: “We are inside the locker room, we have no way to get out because we don’t have a microphone and we are waiting [to find out] how we are going to go home.

“The leaders [of the club] are with us and the people of Lujan are seeing how we can [leave]. I was the first to see that something was happening, I called the fourth referee and asked him to stop the game.

“From then on they asked us to get inside the field, they began to throw stones at us and a very loud bomb fell near the [dugout]. I know it was something serious that happened outside, but we don’t know who what happened.”

Saxon is a prolific writer with passion for the unusual. I believe the bizarre world is always exciting so keeping you up to date with such stories is my pleasure
Previous Woman Who Went Blind After Eyeballs Were Tattooed Says She ‘Doesn’t Regret’ Getting Them Done
Next Watch: Man filmed performing oral s3x on a woman by the side of a busy road (video) 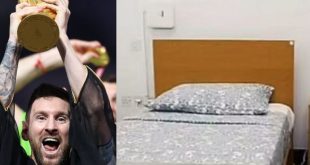 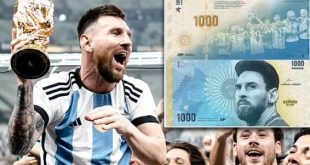 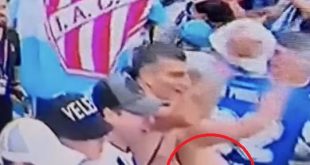 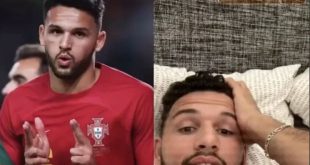