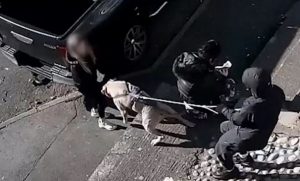 The owners are currently in jail over the fatal actions of their dog named Beast.

A disturbing footage has surfaced online showing the moment a killer dog named Beast lunged at kids and attacked shoppers days before it mauled a 10-year-old boy to death.

The seven stone XL Bully jumped up at passers-by, knocked items out their hands and made children run backwards in fear as its owners struggled to control it with a lead.

Owners Brandon Hayden, 19, and Amy Salter, 29, admitted being in charge of the dog which killed Jack Lis, ten, Pentwyn, Penyrheol, near Caerphilly in November.

Jack’s mum Emma Whitfield clutched a teddy and cried as they were jailed on Friday, June 10, at Cardiff crown court, with details of her son’s death being read out.

Hayden, 19, was jailed for four years and six months, while Salter, 29, was sentenced to three years’ imprisonment.

The court also banned both of them from owning a dog indefinitely.

Saxon is a prolific writer with passion for the unusual. I believe the bizarre world is always exciting so keeping you up to date with such stories is my pleasure
Previous Incredible Moment Mother Bear Tumbles Off Cliff While Fighting Nearly 500-Pound Male Bear To Defend Cub (Viral Video)
Next Two women spotted fighting over a man in Cameroon