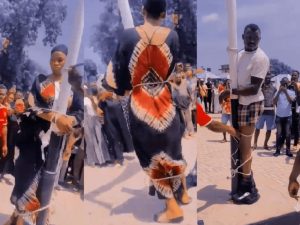 A video currently going viral on social media shows the moment two young lovers were being flogged 20 lashes each for leaking their sex tape online.
The incident happened at the front of the Wa Naa’s Palace where they were flogged with a horsewhip.
The two were tied to a pole and lashed by a man on the orders of traditional leaders, according to local reports.
The teenage lovers – a tricycle driver and a ticket seller at the Wa Central Market in the Upper West Region – received 20 lashes each after their sex tape leaked on Social media. 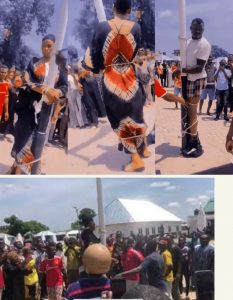 The teenagers were flogged after the Overlord of the Waala Traditional Area, Wa-Naa Fuseini Seidu Pelpuo IV ordered their caning by some youth in Wa.
This was not a case of revenge upload by an enemy as reports alleged that the lady in question uploaded the sex video on social media on Sunday, May 29, 2022.
The two were therefore lashed as their action was against the customs and tradition of the Waala Traditional Area.
The first plan was to give the two lovers 100 strokes of the cane each but this was reduced to 20 lashes each.

Vanko is a cheerful writer whose enthusiasm for unusual stories is inspiring.
Previous Terrifying Video: Man Takes Nap With 2 Pythons Crawling Over Him
Next 19-year-old girl beaten to pulp by her boyfriend (video)