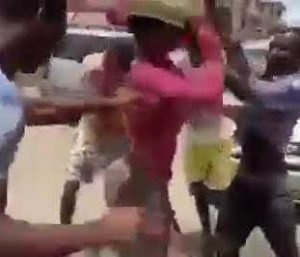 James brown has been publicly disgraced and humiliated by some angry youths in Lagos state.

He was stripped naked and assaulted by some youths because of his manner of dressing and for always acting like a girl.

The angry youths described him as a disgrace disgrace to mankind and that they need to punish him for his wrong deeds.

In a video, the youths were seen tearing James Brown’s clothes and emptying a bucket full of water on him while using the bucket to cover his head.

James Brown was seen in the video trying to fight back without anybody coming to rescue him.

According to some social media users, the youths acted wrongly by assaulting James Brown in that manner, adding that he was not the first crossdresser in Nigeria.

This incident happened some months ago but the video still shows the helpless situation of the attacked crossdresser.

Saxon is a prolific writer with passion for the unusual. I believe the bizarre world is always exciting so keeping you up to date with such stories is my pleasure
Previous Bearded Dragon Arrives With Head Stuck In Toy (Viral video)
Next “Let’s see if it will stand” – curious ladies undress crossdresser to test his manhood (Video)