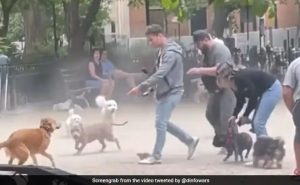 A hilarious footage has surfaced online showing the moment a rat caused chaos after it gets cornered by several dogs.

This happened at Tompkins Square Dog Run in New York, a square where people go and relax with their dogs.

The video has gone viral and now has over 6 million views. It shows owners trying to keep their dogs at bay while a rat is seen running around in the midst of them.

In the video the dogs are seen getting increasingly agitated by the presence of the rodent that continues to dart around the ground.

At one point one of the dogs even manages to get the rat locked in its jaws, shaking it before dropping it again.

A friend of the dog’s owner even posted an update on Twitter saying, “I’m posting on behalf of my friend in the video, Jonah (now known as hoodie man) and his dog, Zoey — both of whom are ok and not sick CC @whatisny”.

This is not the only dog story in recent times that went viral online. A Japanese man recently went viral after he spent £12,480 to ‘turn himself’ into a dog.

Saxon is a prolific writer with passion for the unusual. I believe the bizarre world is always exciting so keeping you up to date with such stories is my pleasure
Previous Man arrested for allegedly killing his ex-girlfriend for refusing to eject her new lover from her home
Next Top 10 News Presenters That Farted Loudly On Live TV, Including Fox News and BBC Staff (Video)