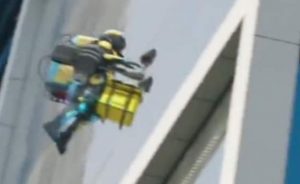 An intriguing video has surfaced online showing the moment a food delivery man was flying to do make delivery to a customer.

The video shows a delivery agent flying up a high-rise building in Saudi Arabia to deliver food.

In the video the man could be seen flying up the high-rise building on a jetpack, also carrying the packaged food to be delivered. He flies from one tower to another to reach his destination. He is seen landing on a balcony where a woman is waiting to receive her food parcel. The video went viral as soon as it was posted on Twitter with more than 4 million views, over 80k likes and thousands of comments.

The video has generated mixed reactions, leaving many people astonished, though there are also some people who think the video is doctored.

Saxon is a prolific writer with passion for the unusual. I believe the bizarre world is always exciting so keeping you up to date with such stories is my pleasure
Previous German shepherds maul 36-year-old man to death
Next Mum-of-three is killed by her husband one week after she posted video of him abusing her (Terrifying Video)