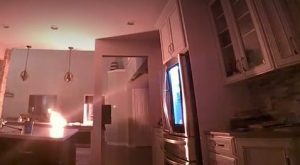 An Ohio family is relieved that nothing in their home was seriously damaged or worse, burnt to a crisp, when their security cameras captured one of their iPhones bursting into flames while everyone was fast asleep.

Jennifer Leisgang and her family hope that their story will keep other families from suffering a worse fate than they did. 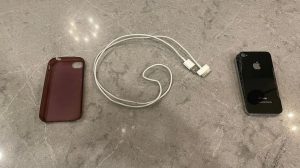 On Jan. 9, at around 1 a.m., Leisgang said she and her family were asleep when an iPhone 4 that was left charging on their kitchen counter suddenly burst into flames.

Leisgang told FOX TV Stations that the phone was charging with an original Apple charger.

Home security camera footage shows a small fire igniting and then violently burning on the countertop for a few minutes before slowly beginning to fizzle down.

The next morning, Leisgang and her husband, Brian, were met with a highly unusual scene — soot all over the countertop and a broken and blackened phone.

“It had a silicone case on it that cracked off and the phone split open. And there was black soot all over the countertop and on the chairs and on the floor,” Leisgang said.

Vanko is a cheerful writer whose enthusiasm for unusual stories is inspiring.
Previous Girl Asks Police To Run DNA Test On Christmas Cookie To Prove Existence Of Santa Claus
Next Endowed woman goes viral after sharing photos of her curves spilling out of skimpy dress (photos)