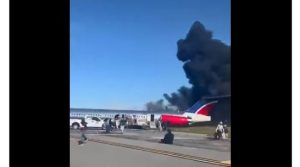 A plane carrying 126 people caught fire when its landing gear collapsed on the runway at Miami International Airport, US.

Dramatic videos of the incident which have gone viral on social media showed that the aeroplane had been doused with white chemical foam by firefighters.

There are some other videos showing terrified passengers fleeing the blaze as firefighters got the fire under control. 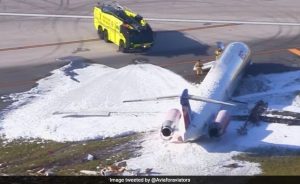 According to the Independent, the plane was arriving from Santo Domingo at around 5:30pm (local time) when the incident took place. After veering off the runway, the aircraft collided with several objects, including a crane tower and a small building in the area.

Following the incident, some flights were delayed. Officials also said that travellers should consult their individual airlines for more information. Further, they informed that the collapse of the front landing gear in the nose of the aircraft appeared to be the cause of the fire.

According to the Independent, Red Air, which is based in the Dominican Republic and Venezuela, only started conducting flights since late 2021.

The company began by flying charter flights between the Dominican Republican and Miami. It also has authorisation for flights to Tampa, Florida; San Jose, Costa Rica; Medellin and Cartagena, Colombia; Panama; and Caracas, Venezuela.

The National Transportation Safety Board (NTSB) said that the airplane was a McDonnell Douglas MD-82, and it will be sending a team of investigators to the incident site.

Saxon is a prolific writer with passion for the unusual. I believe the bizarre world is always exciting so keeping you up to date with such stories is my pleasure
Previous Australian Pub Owner Fights Off Crocodile With Frying Pan in Viral Video
Next Viral Video: California Woman Terrified to Find Two Bears Get Into Brutal Fight In Her Garage