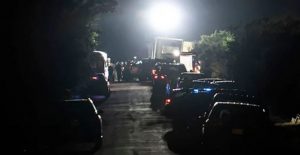 No fewer than 46 migrants were found dead Monday in and around a truck that was abandoned on the roadside on the outskirts of the Texas city of San Antonio.

The grim discovery was one of the worst disasters involving migrants in the United States in recent years — and came five years after a similar deadly incident in the same central Texas city, a few hours from the Mexican border.

“At this time we have processed approximately 46 bodies that have been triaged and tagged and declared deceased,” San Antonio Fire Chief Charles Hood told reporters.

He said that 16 people had been transported to hospital alive and conscious — 12 adults and four children.

There were no initial details on the age or nationality of the deceased.

“The patients that we saw were hot to the touch, they were suffering from heat stroke, heat exhaustion, no signs of water in the vehicle, it was a refrigerated tractor-trailer but there was no visible working A/C unit on that rig,” Hood said.

Officials said three people were in custody over the incident.

“So I would urge you all to think compassionately and pray for the deceased, the ailing, the families,” he said.

“And we hope that those responsible for putting these people in such inhumane conditions are prosecuted to the fullest extent of the law.”

San Antonio, which lies about 250 kilometers (150 miles) from the border, is a major transit route for people smugglers.

It has also been gripped by a record-breaking recent heat wave, and temperatures in the area hit 103 degrees Fahrenheit (39.5 degrees Celsius) on Monday.

The vehicle was found on a road near Highway I-35, a major US artery that stretches all the way to the border with Mexico.

A massive emergency operation was underway at the scene involving police, firefighters and ambulances.

According to San Antonio police chief William McManus, authorities were first alerted by an emergency call at about 5:50 pm local time (2250 GMT).

“A worker who works in one of the buildings up here behind me heard a cry for help,” he told reporters. “(He) came out to investigate, found a trailer with the doors partially open, opened them up to take a look, and found a number of deceased individuals inside.”

He said the probe had been turned over to the federal Department of Homeland Security.

Dozens of emergency responders who had worked at the scene were meanwhile undergoing a stress debriefing.

“We’re not supposed to open up a truck and see stacks of bodies in there, none of us come to work imagining that,” Hood said.

Saxon is a prolific writer with passion for the unusual. I believe the bizarre world is always exciting so keeping you up to date with such stories is my pleasure
Previous Company sells dragonfly-shaped pendant that allegedly chases away mosqitoes
Next Mum & Daughter Raped Inside Car After Accepting Lift From Group of Men In India