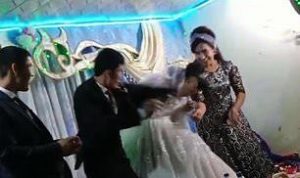 This was definitely not a joke or skit of any kind. It was for real and the bride was visibly shocked and walked out in disgust and disbelief.

A video going viral on social media shows the shocking moment a groom beat his new wife at their wedding for defeating him in a game.

The wedding took place in Uzbekistan but the exact date is not yet known.

Trouble began when the toastmaster made the couple take part in a competition while they were on stage at their wedding reception. 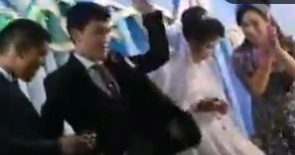 The bride won the game, and when the groom realised he lost, he angrily struck her hard on the back of the head with his fist.

The shocked bride put her hand to her head, before she lifted her white wedding dress from the floor and was led off the stage by two other women.

The groom remained on the stage, as if nothing had happened, staring out across the silenced crowd who moments before were cheering the couple on.

Meanwhile, the best man standing alongside the groom also appeared to be smiling before fidgeting nervously with his phone.

It was not clear whether the wedding went ahead or ended at that point.

Saxon is a prolific writer with passion for the unusual. I believe the bizarre world is always exciting so keeping you up to date with such stories is my pleasure
Previous Bolivia Boy, 11, falls into coma and dies after four brothers ‘repeatedly raped him and gave him HIV’
Next Watch As Smaller Kingsnake Swallows Bigger Rattle Snake In Terrifying Video