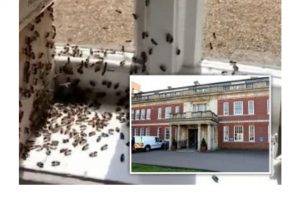 It’s not like it was a kind of ‘prison break’ successfully organized by bees but the police had to leave the space for the bees which came in thousands.
Northamptonshire Police’s Wootton Hall headquarters suffered a bee infestation, an incident that forced the security operatives to evacuate.
The police station became a hive of activity just as a Facebook live session was about to begin last week. The event had to be cancelled. Despite having their own swat team, they decided to call a local beekeeper to rescue them.
Footage of the bees was shared on social media with the hashtags #beesintheboardroom and #stingoperation. 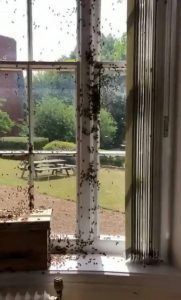 In the short clip, the bees could be seen swarming around a window with a loud buzzing noise clearly audible. The force wrote:
‘Soooo, we had a Facebook Live Q&A scheduled for today on response policing.
‘However, the room we do them in has been taken over by a swarm of bees. There are 1000s!
‘We have had to postpone it for now but will advertise a new date soon so watch this space.’
An update was later made available on the incident saying the beekeeper was in the process of safely removing the insects. 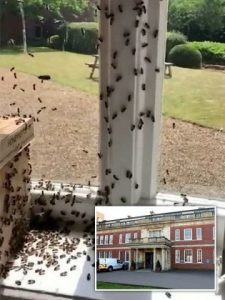 ‘@NorthantsChief however has been making enquiries as to whether we could find small enough uniforms and put them to work ‘#StingOperation,’ it added.

Saxon is a prolific writer with passion for the unusual. I believe the bizarre world is always exciting so keeping you up to date with such stories is my pleasure
Previous ‘Clumsy’ mum falls during sports day parents’ race and moons watching crowd (Photos)
Next Cambodia fishermen catch World’s biggest freshwater fish, a 660-pound 13 foot stingray (photos)