Horse Terrified as Alligator Appears On Racetrack In US (viral video) 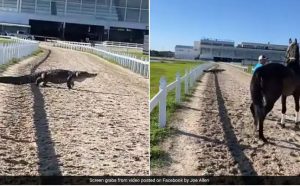 A race track in Louisiana, the Unites States had an uninvited visitor that terrified horses which are actually the real ‘owners’ of the track.

An alligator appeared on this track out of nowhere and left a horse horror-stricken.

This incident took place on the Delta Downs racetrack where the alligator suddenly walked onto the track and its video is now viral.

The short, 10-second clip shows the reptile slowly crossing the track where a handler is standing with its horse.

The video shows the horse running around in circles after spotting the alligator steadily crossing the racetrack.

The video was originally posted on Facebook by Joe Allen, an assistant trainer in RL Racing, and later surfaced on Twitter too. According to Mr Allen’s post, the alligator’s nickname is Marty.

“It’s Marty’s world we just live in it,” he captioned the post. It shows the alligator on the racetrack, like it owns the area.

Well, that's not something you see every day at the track… 😳🐊

The video has attracted several likes and views with thousands of Facebook users commenting on it.

One social media user, Don Stevens, who is a track announcer posted on Twitter, “Marty is on the track.  He wants to race!!”

“Unless you’re at Delta Downs, then it’s a regular occurrence,” another user tweeted.

“I think this gator is well known there, they have a name for him and everything,” read a separate tweet.

The alligator eventually went its way and business continued as usual.

Saxon is a prolific writer with passion for the unusual. I believe the bizarre world is always exciting so keeping you up to date with such stories is my pleasure
Previous Texas Man Kills Himself During Police Chase After Shooting His Wife And Mom
Next Superb! 5-Month-Old Holds Plank While Working Out With Mother (Viral video)