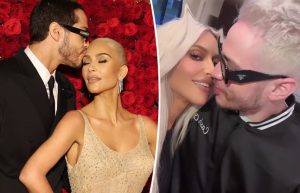 This is supposed to be an intimate indoor joke but it has actually gone viral.

Kim Kardashian and her boyfriend Pete Davidson made jokes about her vagina while they were filming The Kardashians’ on Hulu.

The 41-year-old reality star and the 28-year-old Comedian, have been inseparable since they started dating.

In the preview for the next week’s episode at the end of the episode, Kim is seen telling Pete, ‘Come here, you have to meet Paxy.’

Paxy is a longtime crew member who has worked with the family for years on Keeping Up With the Kardashians.

‘Paxy has worked with me as audio, 14 years from Keeping Up With the Kardashians. She knows everything about me,’ Kim says as crew members are heard laughing.

Paxy admits with a laugh, ‘I haven’t seen your vagina. I haven’t been initiated yet,’ as Kim says, ‘We’ll get there. It takes time to warm up, to seeing my vagina. But you could look on the Internet. I’m just kidding,’ as the season comes to an end.

Vanko is a cheerful writer whose enthusiasm for unusual stories is inspiring.
Previous Girl, 4, dies after being accidentally locked for more than seven hours in 50C school bus
Next Texas man shot dead after confronting couple who took his wife out for drinks till day break