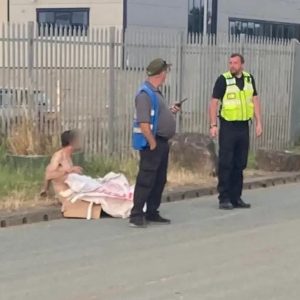 A man was spotted running through the streets naked after he who got stripped by his pals on a stag do. He was left with nothing but a cardboard box and a pair of socks to preserve his modesty as he ran through a UK town in broad daylight.

The man, who spoke with a ‘thick Stoke accent’ according to witnesses, was spotted dashing towards people at a hot air balloon festival at Uttoxeter Racecourse where he begged members of the public to give him a shirt to help cover up.

The unnamed fella approached a group of people and told them he was covered in scratches and bruises after having to run through nearby hedges and grassy areas.

One of the group said: “We saw the man wearing nothing but a cardboard box round his waist and a pair of socks.

“He came running towards us waving one arm in the air – the other arm was being used to hold the box in place – saying, ‘Sorry duck, I’m on my stag do, help us’.

“He asked if he could have my shirt.

“I wanted to help him but others in the group told me not to.

“He was pursued by security staff presumably from the festival. The staff said they had been chasing him all day.

“He told us it was his stag do and that his friends had stripped him and dropped him outside his home. He told me, ‘because I didn’t want my neighbours to see me I started running through the fields’.”

A photograph of the man shows him sitting shirtless on the ground with a box and some sort of cover draped over his lap, along with a couple of men who appear to be security staff standing in front of him.

According to the witness, the man was eventually given a bag to help cover himself up, meaning he could ditch the box.

The group member who spoke to him added: “I suspected he had consumed alcohol or other substances, but he seemed in good spirits and was really friendly and chatty.

“I didn’t believe his story and wondered what the actual reason was for him being there.

“Staff gave him a Build Base bag to wrap around his waist, which was an improvement on the cardboard box.” And much less likely to give him a papercut somewhere unmentionable.

Saxon is a prolific writer with passion for the unusual. I believe the bizarre world is always exciting so keeping you up to date with such stories is my pleasure
Previous Meet Indian Man Who Has Not Bathed in 22 Years (Video)
Next Chess-playing robot breaks seven-year-old’s finger during tournament Video)