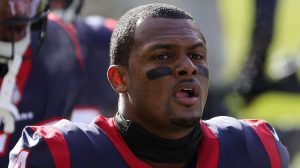 Another woman has sued NFL star, Deshaun Watson, over allegations of sexual misconduct. This brings to 24, the total number of alleged victims of sexual harassment by the NFL star.

Williams’s lawsuit says she was ‘left humiliated and traumatized’ by her second encounter with Watson, who paid her $150 afterwards. She says her first massage with Watson in August of 2020 ended without incident, and he paid her $100 for the session.

‘The allegations made in this new case are strikingly similar to those made by many of the other victims,’ said Texas attorney Tony Buzbee, who represents the plaintiffs. ‘Lost in the media frenzy surrounding Deshaun Watson is that these are twenty-four strong, courageous women who, despite ridicule, legal shenanigans, and intense media scrutiny, continue to stand firm for what is right.

‘Setting aside the legal wrangling, the complicity of the NFL, or the failures of the criminal justice system, the resounding story that should be told here is that these women are true heroes. I will say again, our entire team is incredibly proud to represent these women, and we look forward to the day when we can lay out their cases in detail in front of a jury.’ 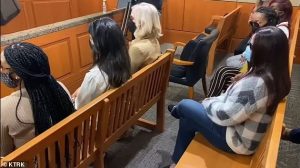 Rusty Hardin, Watson’s attorney, has not released a statement in response to the latest lawsuit against his client. Hardin has insisted that any sexual contact between the plaintiffs and Watson was entirely consensual.

Watson was already facing sexual misconduct lawsuits from 23 women, mostly masseuses, who claim he sexually harassed and/or sexually assaulted them during massages.

According to Mail Online, the first 22 of those lawsuits were filed last year, while the 23rd was filed by Nia Smith in Harris County last week. He was accused of forcing two women to perform oral sex on him, ejaculating on three women, and forcibly kissing another, while 18 women say he touched them with his penis during massages. Watson has denied the accusations, and after he was traded from the Houston Texans to the Cleveland Browns in March, told reporters that he has no plans to settle the lawsuits.

Two grand juries in Texas have reportedly declined to press charges against Watson, though he could still face league discipline as part of the NFL personal conduct policy. 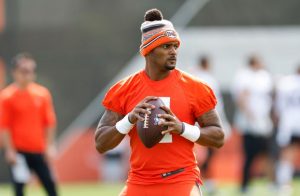 A footnote included in the 23rd sexual misconduct lawsuit against Watson recently revealed that the NFL star’s legal team offered $100,000 settlements to the other 22 plaintiffs on the condition they agree to an ‘aggressive’ non-disclosure clause.

‘Of course, we now know that Deshaun Watson offered each Plaintiff $100,000 to settle their cases, but not all would accept that amount, due to the aggressive nondisclosure agreement that Watson’s team proposed,’ read a footnote contained in Nia Smith’s lawsuit against Watson filed in Houston last week.

(With reports from USA Today)

Saxon is a prolific writer with passion for the unusual. I believe the bizarre world is always exciting so keeping you up to date with such stories is my pleasure
Previous Professional cyclist mistakenly smashes into his wife as she took pictures of him after winning race, lands her in hospital (Video)
Next Pastor Quits Pastoral Job to Become A Native Doctor, Gives Reason