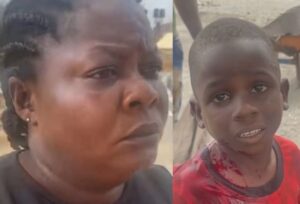 There is outrage on social media after a video surfaced online showing a woman who broke her nephew’s head with empty bottle of Coca Cola and sent him into the street because he misplaced N100 which is about 24 cents.

The woman has reportedly been arrested.

The woman was said to have sent the boy on an errand on Sunday, June 12, and he misplaced N100.

When he returned without the money, she allegedly used a Coca-Cola bottle to break his head.

She then left him on the street bleeding profusely.

It wasn’t until concerned passersby intervened that the woman cleaned the boy’s head with a cloth.

Neighbours then began narrating all the woman has subjected the child to, including biting his finger and giving him a cut on his private part because he wet the bed.

Saxon is a prolific writer with passion for the unusual. I believe the bizarre world is always exciting so keeping you up to date with such stories is my pleasure
Previous Viral Video: 4 women beat up pizza chain employee for allegedly staring at them
Next Man allegedly poisons his two children to death, commits suicide