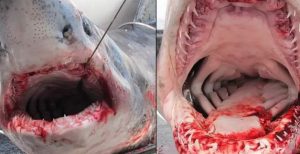 This is one incident that has continued to raise negative memories for a man who survived the nightmare.

Back in 2011, a Scottish fisherman made headlines when he narrowly escaped an attack from a giant 8ft shark in the Inner Hebrides.

Contrary to popular belief, an estimated 40 species of sharks inhabit the waters around the British Isles from one end of the year to the other.

The most common shark spotted in the UK is the porbeagle. A cousin of the Great White, the porbeagle can grow to a whopping 12ft in length and looks scarily similar to its infamous relative.

Scottish skipper Hamish Currie found himself in a painful and terrifying situation with such a shark when one ended up on his boat off the isle of Islay.

“There had been reports of him attacking seals off the island,” Currie told BBC Breakfast at the time, “So I figured I’d go up and tag him, but I got more than I bargained for.”

And the pictures speak for himself, with one photo showing his boot torn to shreds after the encounter.

Sharks have been known to swim close to shorelines to look for seals to feed on. Track and tag programs, like the one Hamish is part of, are used to alert locals of possible sharks in the area.

As part of the program, Hamish tags the shark and releases it back into the water, with as little harm as possible caused to the fish or himself.

Things did not work as expected on that day as Currie found himself in a fierce struggle with a large porbeagle. Once on the boat’s deck, it somehow managed to latch onto his foot. Thankfully crewman Andrew Logan’s quick thinking saved the day. Logan managed to get hold of the shark’s tail as it chewed on his workmate’s boot, which was very much still on his foot at the time.

“He grabbed the shark by the tail, and it was like a tug of war.”

It certainly could’ve been worse for Currie, who managed to get away from the creature relatively injury-free.

“I would just like to give thanks to my crewman Andrew Logan. If he didn’t pull the shark off me, god knows what would’ve happened. It finished up with my boot in its mouth.”

When questioned about the difficulty of hunting sharks, he was quick to point out that it’s not an activity suitable for everyone.

Saxon is a prolific writer with passion for the unusual. I believe the bizarre world is always exciting so keeping you up to date with such stories is my pleasure
Previous ‘Black Alien’ Is Considering Having Leg Amputated After Slicing Off His Ears And Lips
Next 8-year-old girl battles for life as mother burns her over toffee worth 50 pesewas