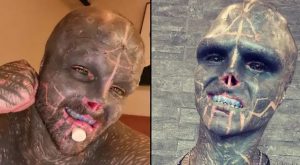 A man who is transforming himself into a ‘black alien’ has revealed he’s debating chopping off part of his leg too.

Anthony Loffredo has been undergoing multiple tattoo sessions and body modifications in a bid to find happiness in looking like a ‘black alien’.

From getting two fingers sliced off, to his top lip removed and tattooing the majority of his body in black ink, Loffredo has been modifying his body since the age of 27.

While it may seem like he doesn’t appear to be far of his goal, Loffredo has opened up about what other procedures could be in store for the future.

In episode 116 of podcast Club 113, Loffredo revealed the next body modification he has planned is on his face again.

He’s already had his nose and lips modified and ears cut off.

When questioned as to what happened to his ears, he said: “My ears. My friend keeps them.”

He also admitted he could be looking to branch out from just modifying parts of his face, and is considering chopping off half of one of his legs.

However, he noted: “It’s something really hard because I have a healthy leg and an amputation it’s something big.”

Loffredo clarified the amputation would be from his knee and that he is only thinking about having the procedure on one of his legs.

When asked whether or not he would then get a prosthetic limb to replace the lower part of one of his legs, the discussion led onto chips and other futuristic ideas for Loffredo’s journey to becoming a ‘black alien’.

He said: “I like everything surrounding this. It draws my attention, technology and the future.”

Although he joked technology hasn’t always agreed with the changes he’s been making to his body, as his phone no longer recognises him so he can’t use his Face ID anymore.

Loffredo documents his journey to becoming a ‘black alien’ on his Instagram account, updating followers as to how far along he is in the process of his ‘evolution’ and ‘transformation’, which are currently said to be at six percent and 44 percent.

However, his aspirations do have drawbacks, with his appearance not having been as easily accepted by his family or some members of the public.

On an earlier episode of the podcast, Loffredo revealed he’s had to face some extreme reactions, such as people shouting at him or running away from him in the street.

However, he explained he goes out of his way to try and make others feel more comfortable, such as by crossing the street, while also continuing to modify and change his appearance to find his own inner happiness too.

Saxon is a prolific writer with passion for the unusual. I believe the bizarre world is always exciting so keeping you up to date with such stories is my pleasure
Previous Paedophile who wanted to rape 12-year-old girl in front of her mother cries that jury didn’t consider his mental health
Next Scottish Fisherman Recalls Moment He Was Attacked By Deadly 8ft ‘Mini Jaws’