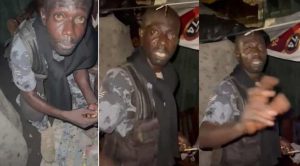 A police officer in Ghana is currently in trouble after a video of him smoking weed in an area known for hard drugs use has gone viral on social media.

The officer was confronted after he was caught smoking weed in a low income area popularly described as ‘trenches’ while in his uniform.

According to the police statement, investigations are still ongoing, and the Sergeant will face disciplinary and judicial punishment.

Saxon is a prolific writer with passion for the unusual. I believe the bizarre world is always exciting so keeping you up to date with such stories is my pleasure
Previous Ghana female secondary school students suspended after they were seen in viral video smoking shisha in their school uniform (video)
Next 9 Men Arrested For Attacking 2 Women In China Restaurant After Alleged Failed Sexual Harassment