Police officers repeatedly punch boy, 16, in garden while trying to arrest him (video) 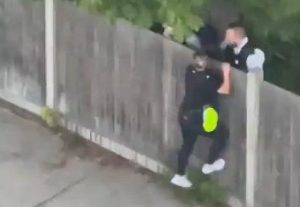 A dramatic video has emerged of Metropolitan Police officers allegedly throwing punches at a teenage boy during an arrest.

The footage which has gone viral was recorded by an onlooker who claimed the boy was being ‘bashed up’ during the incident that took place in southeast London on Friday, June 10.

The incident began after a child was robbed and threatened with a bottle by a group of males, a spokesperson said.

Investigations led officers to a home in Abbey Wood where they found the stolen property.

A boy, 16, tried to flee the scene and was arrested, but another teenager the same age then allegedly assaulted officers – leaving two with minor injuries.

Sharing the video on Twitter, Carina White, a media commentator, reportedly said: ‘Hey Met Police, just wondering if this is reasonable and appropriate use of force to detain a 16-year-old child? Kicking and punching???’

She went on to claim the teenager had ‘gone to see if his friend was OK as he saw police in his garden and this is what the end result was’, adding: ‘The police weren’t even there for him.’

Responding to her Tweet, one social media user said: ‘It’s the fact that he’s down and they’re still dropping blows, that gets me fuming.

‘Is he an “apprehended suspect” or is he an opp? Because based on this vid, it look like road beef, not an arrest.’

Another person wrote: ‘This is outrageous and must be investigated.’

In reaction to the outrage on social media, the Met police say body-worn video footage will be assessed, adding that any use of force by officers must be deemed necessary and proportionate.

Saxon is a prolific writer with passion for the unusual. I believe the bizarre world is always exciting so keeping you up to date with such stories is my pleasure
Previous Couple seen walking around nak3d at night in affluent neighbourhood in Nigeria (video)
Next Mum hands over her son to police after he confessed to raping their 68-year-old neighbour in her home