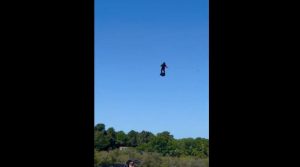 The event pulled a small crowd but the invention disappointed them.

Franky Zapata, invented a “flyboard” device and on May 28, he wanted to demonstrate it in Biscarrosse, a town and beach resort in the Landes region of Southwestern France. He ended up plunging into a lake after spinning out of control.

A video captured by Alexandre Desvignes shows Zapata spiraling at height before plunging into the lake.

According to what Desvignes told Storyful, it happens that was likely a malfunction or mistake that led to “an unstoppable flat spin.”

He said that luckily Zapata managed to crash in deep water, adding it “could have been solid concrete.”Zapata said on Twitter he was “doing well”.

He thanked first responders, and added, “one only learns by such errors.”

Zapata is known for being the first person to successfully cross the English Channel on a “jet-powered flyboard”.

It did not work for him this time. Best of luck next time.

Saxon is a prolific writer with passion for the unusual. I believe the bizarre world is always exciting so keeping you up to date with such stories is my pleasure
Previous Catcher Removes Small-Eyed Snake From Dining Room in Queensland (Video)
Next Corpse of boy struck dead by lightning abandoned for fear that the gods killed him