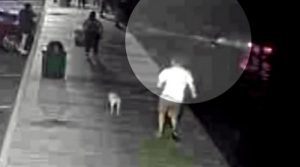 A surveillance video which has now gone viral shows the moment a 17-year-old boy saved a woman whose SUV plunged into a Long Island bay she accidentally hit the gas pedal instead of the brake on Tuesday.

The teen is now being celebrated as a hero for this brave action.

Suffolk County Police Department said Mia Samolinski, 18, had stepped on the wrong pedal in her Subaru Outback as she was leaving a South Ocean Avenue parking lot adjacent to Patchogue Bay shortly after 10 p.m. Tuesday night.

In surveillance video, the car can be seen plunging straight into the water, spurring Anthony Zhongor into action.

“I heard a huge splash and saw everyone running toward the dock. I don’t know what happened,” Zhongor told NBC New York.

A crowd could be seen gathering around as the incident unfolded. Footage shows Zhongor dive into the water.

According to police, he managed to open the driver’s side door of the vehicle and get Samolinski out and to a nearby dock.

“Dying, being stuck is one of my worst fears, so I couldn’t imagine someone going through that right in front of me,” the teen said.

Neither Samolinski nor her rescuer were injured in the incident.

The car was eventually pulled from the bay with a heavy duty wrecker.

According to NBC New York, Samolinski’s father met with Zhongor on Wednesday and thanked him for his bravery.

Saxon is a prolific writer with passion for the unusual. I believe the bizarre world is always exciting so keeping you up to date with such stories is my pleasure
Previous Boy Rescued After He Was Trapped For 4 Days in Well With a Snake and Scorpion (Photos, Video)
Next 9-year-old girl shot dead by mom’s ex-boyfriend during argument