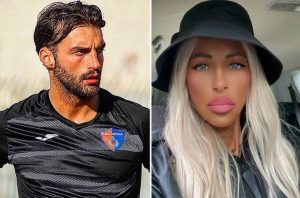 An Italian footballer allegedly clubbed his ex-girlfriend to death with a hammer and a baseball bat weeks after she reported him for stalking.

Giovanni Padovani – a model and former youth payer at Napoli – has played as a centre back for ten clubs in Italy’s Serie C and Serie D leagues.

Earlier in August he signed for fourth tier Sancataldese, based in Sicily.

But last weekend he was absent from the opening clash of the Italian Cup, against local rivals Catania.

Giovanni Padovani, 27, allegedly left his team on the eve of a cup tie and flew to Bologna to lie in wait for his older lover Alessandra Matteuzzi, 56.

As she arrived home he then ambushed her in the lobby of her apartment building, police said.

She was on the phone with her sister Stefania who heard her agonizing screams as she was being attacked.

The sister told a local TV station: “She got out of her car and started screaming, ‘No Giovanni, no, I beg you, help.’

“I was on the phone. I immediately called the Carabinieri who arrived straight away.

Alessandra and her younger lover had been a couple for around a year, according to reports in Italy.

However they spent most of their time apart as she lived in Bologna and he played his football in Sicily.

In January there was a bust-up at her home when he smashed dishes and a light bulb, her sister claimed.

After they split he allegedly bombarded her with messages and calls at all hours.

On previous occasions he had sabotaged her car, disconnected her meter from the outside, and tried to climb up to her balcony, residents said before she reported him to police for stalking, according to police allegations.

One neighbour told local Sicily media: “She was very afraid of him because he had become persistent and she didn’t want to let him in the house”.

Another neighbour said Sandra had asked her not to open the door if Padovani rang the buzzer to get into the building.

He said a probe was immediately launched after the complaint was registered on August 1, but the investigation could not conclude until next week because witnesses were on holiday.

“We did what we could,” he said, adding the stalking report did not highlight “situations of a concrete risk of violence, it was just the typical conduct of bothersome stalking”.

He phoned the club asking to rejoin the team on Monday but was told to stay away, reports Corriere della Sera.

He then flew to Bologna in northern Italy, where he allegedly ambushed his ex on Tuesday this week.

After Alessandra died in hospital of massive head injuries, Padovani was arrested on suspicion of aggravated murder and is being held in custody.

Saxon is a prolific writer with passion for the unusual. I believe the bizarre world is always exciting so keeping you up to date with such stories is my pleasure
Previous Girl spotted taking her ‘support alligator’ for a swim and a walk (video)
Next Jealous wife cuts sleeping husband’s penis after argument over cheating suspicions