Home / Europe / Groom Disappears On His Wedding Day, Bride Goes Ahead With The Event In U.K (Photos) 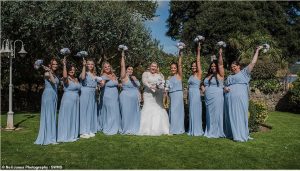 A woman has become an internet celebrity after she decided not to ruin her wedding day fun even after the groom shocked her with unbelievable action.

Kayley Stead, who lives in Swansea, only learnt she wouldn’t be getting married on the morning of her wedding.

Despite the heartbreak, Kayley decided to go ahead with the big day, surrounded with her loved ones around her, on September 15 at Oxwich Bay Hotel in Gower, Swansea, Wales. 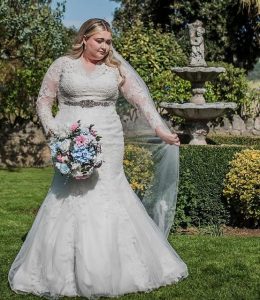 Kayley went ahead with her wedding entrance, meal, speeches, dances and even posed for professional photos without her groom.

She spent £12,000 on the nuptials, so decided to enjoy the day with family and friends.

The bridal party woke up around 6am, and started getting ready, the groom had disappeared by this point.

Kayley (pictured with her bridesmaids) said ‘asked the girls, his family and the groomsmen to continue getting ready, because I honestly believed he was going to be there’.

The night before the wedding, Kayley stayed in an AirBnB celebrating with her bridesmaids while the groom and his groomsmen stayed in a caravan near the venue. 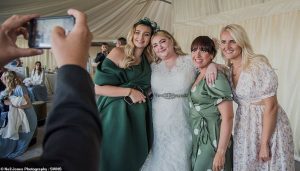 Kayley said: ‘The groom and I had already agreed not to speak the night before the wedding anyway, so I didn’t know what was happening at his end, I didn’t have a clue.
I was in complete bliss – unknown bliss.’
The groomsmen contacted the bridal party to tell them he hadd left, she claims.
Kayley said: ‘We woke up around 6am when the make-up artist arrived, we had breakfast together and then started getting ready.
‘One of the groomsmen contacted my best friend to say the groom was gone, and the bridal party hid my phone so they could decide what was the best way to tell me and I wouldn’t find out from someone else.
‘They wanted to make sure he was definitely gone before panicking me.
‘I found my phone and saw missed calls from his mum. 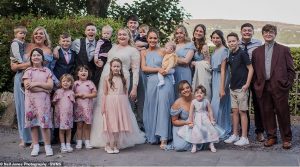 I called her back and she was crying and told me he had gone for a drive in the early hours of the morning, and he was gone.
‘At that point, I wasn’t nervous, I was still quite hopeful, as throughout our relationship, he had sometimes gone for a walk or a drive to clear his head when he was nervous.
‘For a couple of hours, I was saying he was going to be there, and I was reassuring the girls. I honestly believed, hand on heart, that he was going to be there. 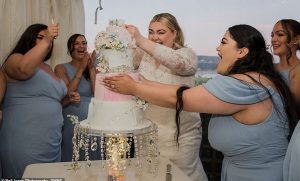 ‘I asked the girls, his family and the groomsmen to continue getting ready, because I honestly believed he was going to be there.’

While the groom may not have been at the wedding, Kayley’s friends and family were, and she made the most of their company to ensure the day wasn’t all about misery and heartache.

Describing the day, Kayley has said she ‘wanted to make sure everyone knew that it wasn’t about the sad, we were going to power through this.’
Among the traditions Kayley was looking forward to was dancing with her father, which she decided to go ahead and do despite her groom ditching the big day.

Kayley was with her boyfriend Kallum for almost four years, with the groom-to-be proposing in August 2022.
Now Kayley says she is pleased she still had the party, so that all the money and effort put into planning the do didn’t go to waste.

Saxon is a prolific writer with passion for the unusual. I believe the bizarre world is always exciting so keeping you up to date with such stories is my pleasure
Previous Massive protests erupt in Russia while thousands take flights out of the country after Putin called up 300,000 reservists to fight in Ukraine (Photos/videos)
Next Undergraduate Student Kills His Parents, Leaves Decomposing Corpse In Room (Graphic Photos)