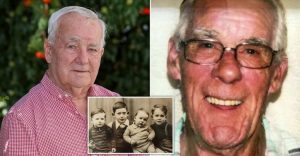 A man is on his way to Australia to meet his long-lost brother who he has not seen in 77 years.

Ted Nobbs, 83, had three brothers as a child – Barry, John and the youngest, Geoff. But the family was torn apart when their mum died of cancer, aged 30, in 1945. Ted Nobbs from Rugby, Warwickshire, UK has not seen his brother Geoff as his dad who could not cope with caring for all four children, decided to offer Geoff up for adoption so he could have a better chance at life. 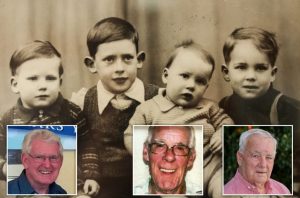 Ted said: ‘[My dad] was working, he was an engineer. He just couldn’t bring up a baby and just thought it better to give him to someone else.’

Geoff ended up being adopted by a family who moved him to Australia in 1951. Ted, Barry and John tried several times to track their youngest brother, Geoff down over the years, but couldn’t.

Eventually, Geoff was able to contact Ted, who lives in Rugby, Warwickshire, in 2014.  Unfortunately John died in 2010, at the age of 73, so Geoff was only able to virtually meet Ted and Barry.

All three brothers started regularly chatting over Skype and formed a relationship with one another.

Ted’s wife and son Christopher had planned to surprise him with a visit from Geoff on Ted’s 80th birthday but Covid-19 restrictions disrupted the plans. Ted says he will now fly to Sydney, Australia, on Sunday, September 4, the first time he will enter a plane in 50 years.

Ted, a retired factory worker will meet Geoff’s eight children and even get to go to Geoff’s granddaughter’s wedding.

Ted said: ‘We had the celebrations anyway and there was a big TV in the hotel and Christopher had got a video off Geoff that he played. He wished me happy birthday. 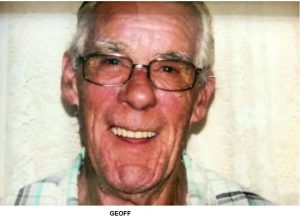 Ted said: ‘[Geoff] hasn’t filled me in on a lot about his life out there. To be honest when we’re chatting we’re usually ribbing one another about the cricket or ruggers.’

Barry is not able to join the reunion because of medical issues.

He said: ‘I’m extremely happy for them but quite envious of Ted being able to go.

‘It’s quite just heart-breaking as I just want to give him a hug – but it’s really lovely Ted will be able to do so. I’m just glad we’ve found him after all these years.’

Saxon is a prolific writer with passion for the unusual. I believe the bizarre world is always exciting so keeping you up to date with such stories is my pleasure
Previous Watch as driver drags 78-year-old woman out of Access-A-Ride car in New York (video)
Next Weird: Some Women Now Wear Remote Controlled Vibrating Panties