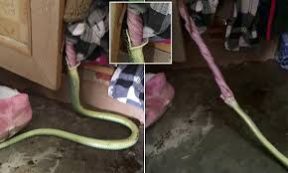 A Thailand man returned home to find the wrong “laundry” man messing with his wife’s lingerie.

The 35-year-old Sakda Lasada, captured video of a snake he found in his bedroom that had partially swallowed a piece of his wife’s lingerie, reports UPI.

He said he returned home in Ubon Ratchathani and discovered a golden tree snake was in his bedroom.

Lasada then pulled on the snake’s tail and discovered the reptile had swallowed a large section of his wife’s pink silk nightie.

”I think the snake felt a little bit sick. It’s not the normal food they eat. It would have been very difficult for him to digest this. He could have had problems if we didn’t pull it out,” Sakda said.

The viral video shows him pulling on the snake’s tail, causing it to regurgitate the lingerie.

Lasada said he safely released the snake outside his home.

What a nice treatment to give a venous “laundry man” who broke into your house to mess with your wife’s lingerie.

Saxon is a prolific writer with passion for the unusual. I believe the bizarre world is always exciting so keeping you up to date with such stories is my pleasure
Previous Man Survives After Four Bamboo Poles Pierce Into His Chest
Next Dead Church Leader Gets Two Separate Funerals At The Same Time Due To Serious Infighting Among Followers