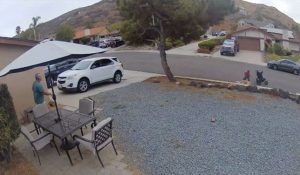 A video making the rounds online shows a man carrying a baby in a stroller outside his house with a dog following him.

Suddenly, another canine appears in the frame and is seen running towards the man and the dog. The alert man immediately lets go of the stroller to protect the dog.

The other canine raced out of a house where the camera that captured the entire incident was installed and was heading to attack the other dog. The man can be seen carrying the dog for some distance while the stroller carrying baby moves away. Another man who can earlier be seen walking outside his house can also be seen rushing towards the man and the stroller to save the baby.

Shared by a user named Animals Being Jerk on social media platform Reddit on Wednesday, the caption reads, “My dog bolted out the front door and anarchy ensued.”

Since being shared, the video has amassed over hundreds of likes and comments. Some of the users suggested the protective ways to keep the dogs inside the house while others compared the incident with a movie in the comment section of the post.

One user wrote, “And that’s exactly why we have baby gates at the top of the stairs to keep our dogs away from the door. My older dog has gotten aggressive and senile and would happily attack any dog walking by if she got out.”

“We are getting closer and closer to things being like the movie idiocracy,” said another.

“Dude picked up his wolf dog, let his child go god knows where. While a dog the size of a bag of sugar is chasing them like get a grip man,” wrote a third user.

Saxon is a prolific writer with passion for the unusual. I believe the bizarre world is always exciting so keeping you up to date with such stories is my pleasure
Previous Two widows accused of being witches beaten to death
Next Russian police arrest owners of flashy supercars as they take part in car racing while the country engages in war with Ukraine (photos/video)