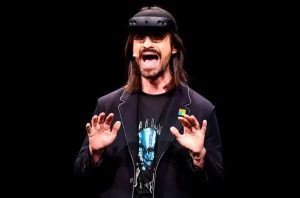 Microsoft has refused to confirm or deny the sordid allegations.

The sexual display was seen on nearby TV monitors for all the late-night employees to see.

The VR video reported featured women dressed in skimpy outfits who were participating in a sexualized pillow fight, according to Insider.

“It was in the office, in front of women,” the employee said.

Insider reported that the incident took place several years after Microsoft CEO Satya Nadella pledged in 2014 to clean up Microsoft’s culture and crack down on “talented jerks.”

Saxon is a prolific writer with passion for the unusual. I believe the bizarre world is always exciting so keeping you up to date with such stories is my pleasure
Previous Bizarre footage shows strippers wearing bikini do teddy bear rolls around pole as cash rains on them
Next Man arrested for allegedly killing his ex-girlfriend for refusing to eject her new lover from her home